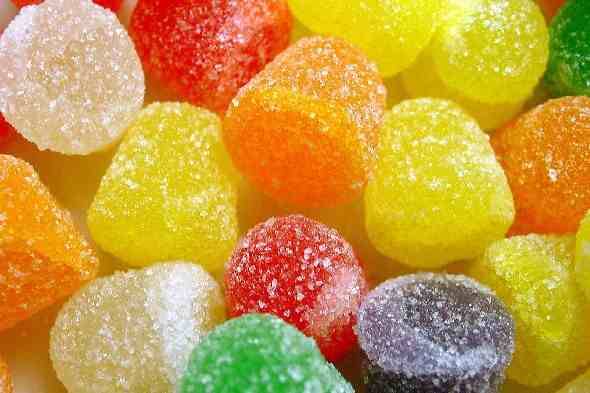 The Food and Drug Administration’s new recommendation that Americans eat no more than 10 percent of calories from added sugar is a giant leap in the right direction, according to sugar scientist Laura Schmidt of the University of California, San Francisco. But confusion about the difference between added sugar and naturally-occurring sugar, as well as the way foods are marketed and labeled, have created a food environment in which people aren’t quite sure how much added sugar they’re actually eating — much less how to strategize ways to lower those numbers.

Naturally occurring sugar refers to the sugar that naturally comes in whole foods — say, the fructose in whole fruit, or the lactose in milk. Added sugar is the extra sugars and syrups that are added in the manufacturing of a food, like the white table sugar added to fruit to make jam, or the brown sugar in cookies and other baked goods.

Joining the World Health Organization and the American Heart Association, the FDA made its 10 percent recommendation for added sugars in order to help folks avoid developing diabetes, cardiovascular disease, and obesity, which affects about one-third of American adults and roughly one in five children and teens.

Unfortunately, the average American eats much more sugar than what’s currently proposed — about 16 percent of daily calories come from added sugar, according to the FDA, and it’s really easy to go over the limit considering a “normal” treat like a 12-ounce can of soda has 10 teaspoons of added sugar. That’s more than any person should consume in one day.

But if we can all get ourselves off the sugary drinks, we would be lowering our total sugar consumption, on a population level, by almost half.Dr. Laura Schmidt, sugar scientist

At TEDMED, a three-day conference focusing on health and medicine, we asked Schmidt, a professor of health policy, how we can cut down on sugar intake and create a healthier world for ourselves and our children.

You’ve probably already heard this, and the rest of the U.S. is getting the message, too. Sales of soda are down more than 25 percent over the last 20 years, and sales of orange juice are down40 percent since the late ‘90s. Schmidt says this should be the first step for anyone who wants to cut down on their added sugar intake: draw down slowly, and then use diet drinks if you have to in order to kick that final soda out of your life. As for juice, Schmidt suggested there’s nothing healthier for kids than a piece of fruit and a glass of water.

“For many people that can mean a lot of craving, and it can be hard,” Schmidt said. “But if we can all get ourselves off the sugary drinks, we would be lowering our total sugar consumption, on a population level, by almost half.”

Strategy 2: Get it out of your environment.

Schmidt’s research roots are in alcohol addiction, and she first began to get interested in the impact of sugar on diets when she learned one of the top reasons for liver transplants is non-alcoholic fatty liver disease, a condition linked to obesity and diabetes — not alcohol abuse. Consequently, although the research is out on whether sugar truly is an “addictive” substance in the traditionally scientific sense, Schmidt isn’t afraid to use for sugary foods the same public health tactics she learned studying alcohol addiction.

That means people who struggle with added sugar consumption should clear their pantries of sugary offenders and commit to stop buying them in the first place.

“We call it harm reduction in addition treatment,” Schmidt explained. “If I were an alcoholic, I don’t spend a lot of time in bars. If I have a soda problem, then I don’t have it in my house, and I try to avoid contexts where it’s highly available.” Practically, that means if you have the financial means, shop at a farmers market or supermarket, not corner store bodegas where sodas and other junk food are front and center of the display.

Another principle straight out of addiction treatment is to delay the first time a child has a food or drink with a lot of added sugar, Schmidt explained.

The goal should be to delay the age at which a kid first has a soda.

“The goal should be to delay the age at which a kid first has a soda,” Schmidt. “And a child does not need juice … it’s better to give kids whole fruit or maybe blend fruit up in a smoothie.”

The theory behind this tactic, just like the principles that encourage parents to delay a teen’s first cigarette, alcoholic drink or sexual experience, is that the child grows up enjoying the way they feel without that cigarette and beer, or makes more mature and informed sexual choices as a young adult.

Schmidt said this idea shouldn’t be taken overboard — say, by telling all the parents in your social circle not to offer your kid soda — because it makes your child a pariah and that drink forbidden fruit. But your house, where kids spend most of their time, should be the healthiest environment it can possibly be.

Strategy 4: Be wary of foods that come in boxes, bags and cans.

Let’s say you’ve kicked sugary drinks out of your kitchen and your everyday meals. The next step, said Schmidt, is to start hunting for that hidden sugar, usually found in highly processed foods that come in boxes, bags and cans. The more you’re cooking from raw ingredients like whole foods, the less you’re eating what Schmidt calls “organijunk” — snacks labeled organic, “healthy” or fortified with vitamins and nutrients, but full of hidden sugars.

“Manufacturers have figured out that mothers know if ‘sugar’ is in the first three listed ingredients, they don’t buy it,” Schmidt said. “Now they just put 10 different kinds of sugar in the product.”

Be suspicious if a product’s ingredient list is long, she continued. Unless you’re reading ingredients that you yourself would put in a homemade dish, don’t buy it.

Strategy 5: Build a supportive community that cares about healthy eating.

Schmidt is impressed at how Crossfit’s company leadership united against selling sugary sports drinks at their gyms after an impartial review of the scientific evidence. She said she doesn’t know too much about the exercises that make up CrossFit’s core program, but she wishes other organizations — say hospitals, schools or workplaces — could have the same sense of responsibility toward community members.

“That’s what’s cool about what CrossFit did; they said, if we’re about health, let’s look into this and actually decide whether we should be advocating Gatorade for our people,” Schmidt said. “That’s where I think the health sector needs to go; the hospitals need to stop giving unhealthy food to patients, because it’s our responsibility.”

In the same way, she said, you can create a community that celebrates healthy choices in your school, church or parent-teacher associations.

“As a sociologist I’ve always been told real social change comes from civil society,” she concluded. “When you look at these organized entities, together they could get together and form a social movement — and that’s when Washington starts to listen.”

You might not think attending political meetings or donating to campaign finance reform causes is part of a healthier diet, but in fact these steps are actually the most vital to create change on a national level. Politicians often don’t make the decisions that are best for the health of their constituents because they’re in the pockets of big donors from the food industry, Schmidt explained. The sooner we can pass campaign finance reform, the sooner politicians can get back to advocating for the health of their communities instead of looking for ways to do their jobs while still appeasing their donors.

A special 2012 analysis by Reuters noted that some of Big Food’s greatest lobbying accomplishments include getting Congress to declare pizza a “vegetable” so it could remain on cafeteria menus, defeating soda taxes in dozens of states and killing a plan to make foods marketed to kids healthier.

“The first thing we need to do is put pressure on our elected officials to stop taking money from corporations, and lobby our government agencies — the [National Institutes of Health], [Centers for Disease Control and Prevention] and every health organization — to stop, too” said Schmidt. “A lot of this is public information, so we should be using that to call people out.”

Stay In Shape With The Newly Opened Options Studio At Shang